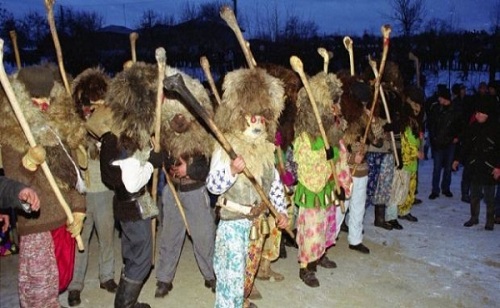 Keeping in mind the memory of the legendary Horia-one of the leaders of the great peasant rising of 1784 who, while living in the little house on the foot of Magura hill, carved, together with his companions a beautiful little wooden church now on show at the Village Museum in Cluj, on that day in May the people at Cizer live in a fairy tale atmosphere.

At down, the sheperds start the „masuris” (weighing) of milk. By noon other bands of sheperds from the environs, Pria, Cizer, Boian and even from farther away, climb Magura hill to lay in a beautiful glade, an enormous meal for everybody present , enlivened by pastoral songs, which are awarded the „The Big cheese of Masuris” .

Folk dances from Valcau, Seredei, Cizer, requiring great vituosity – among them the famous dance „Muiereasca” (Womanly Dance)- songs played on the pipe (Buciumi), the taragot (Cizer) are permanent Contests of strenght (tranta, trasul franghiilor, etc) and other entertaining games succeed one another gaily, until dusk when the glade echoes with the sound of dancing and yells.

Harghita Spring
On the 3rd Sunday of May – Jigodin Baths, Harghita Country

At the foot of the Harghita mountains, on a picturesque plateau situated on the right side of the Olt, on the sites of very ancient settlements dating from the bronze age and of dacian fortifications ( „ Dealul Cetatii ” ) almost 20 000 spectators and 3 000 Romanian and Hungarian amateur artists meet in spring every year.

A feast celebrating the beginning of field work every year in witch participate  choir and dance groups, popular music bands, orchestras, solists and folklore groups, lays special stress on interesting Romanian, Hungarian and Szeckler customs. Among these the most remarkable are „Capra ” (The Goat Dance ) with a Hungarian variant – Kecskestanc (Varsag), „Lasata Secului” (The Beginning of Lent), a Hungarian wedding in Armaseni, a Cengau wedding in Lunca de Sus , a Romanian wedding in Sarmas, or „Culesul verzii (Kaposzta szuret), (Cabbage Gathering) at Frumoasa.

Tinjaua
1-st Sunday of May – at Hoteni,a village belonging  to the commune of Ocna Sugatag, Maramures County

This old spring custom celebrating the industry of the ploughman who, able to foresee the weather, finds the most favourable moment and is the first to start ploughing, has been mentioned since 1870 as „a Romanian custom” , the origin of which dates from times immemorial. Describing the honouring of the man who is the first to start the ploughing, a real „king of the village”, some documents showed that the „election of the king”, renewed every year is a reminescence of certain old Roman practices.

First of all, the men congregate and decide upon who is entitled to be feted. Then 24 lads, with „tinjauas” or „rude” in local vernacular – accompanied by „ceterasi” – and the whole village following, go to the house of the foremost man in agriculture where they decorate the „tinja” with green leaves, „stergare”(towels) and many -coloured ribbons; they do the same to his gate and his „tirnat .”

A „teleguta” – a small cart – tied to the 12 „tinjale” drawn by the lads, carries the peasant who is feted, followed by a crowd of people and a band, along the village lanes, to the spot he has ploughed, and from there to a clear brook. On the way the man tries, but, ofcourse, fails, to give the lads the ship and to run away (a bet is laid before) not to have to defray the expenses of the party. At the brook, the oldest man in the village – „the great Pogonici” – as the is called, washes the peasant`s face and hands, reciting an incantation handed down from time out of mind: „Splendid travelling sun / Bend over the fields / And warm the seeds / to make the cornfields yield fruit. ”

The lads and the young girls dance a hora and with food and palinca return to the village to make merry the whole day, in honour of the diligent ploughman. Song and dance groups from the whole of Maramures county lend colour and charm to this popular spring merry-making.