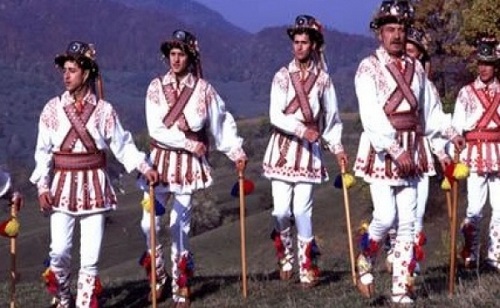 The festival, also known as the „Folklore festival of the Settlements on the Cerna” is a part of a justified action meant to stimulate and turn to account popular creation in a folklore area lying between the Cerna and Mehedinti mountains. Amid the beautiful highland scenery of the resort of Baile Herculane (Herculane Baths), there takes place a real outpour of genuine songs and dances performed by artists from the rural Mehedintean settlements of Izverna, Prejna, Podeni, or from the places in Caras-Severin -Mehadia, Cornereva, Toplet, etc, well-known folklore centres boasting invaluable artistic treasures.

The competition of the popular dancers and singers is preceeded  by a number of assemblies of experts in local folklore, aimed or studying, theoretically and practically, natural links between tradition and contemporaneousness

For two days  „The Calus ”, an ancient Romanian dance, the expession of the Romanian people`s artistic genius, of their energy, liveliness and spiritual nobility, the purified image of the millenary existence of the inhabitants on this territory appears in all its splendour at Slatina under aspects of an astonishing variety displayed with unparalleled art by the dancers from Osica, Vilcele, Balanesti, Colonesti, Priseaca, Icoana, Brincoveni, Izbiceni, Scornicesti, Radomiresti, Movileni (Olt County), from places in Teleorman, Vilcea, Arges, Dolj, Gorj, Hunedoara, Alba, Ilfov and Mehedinti counties.

The folklore pageant which every year opens this real mini-Olympic competition of „calusari ” is in fact a charming review of the costumes of the calusari and of the distinct style of each separate team of dancers. Then come thrilling competitions of virtuosity, interupted now and again by solo dancers, some of whom are very old men, and even children who have inherited their parents` talent.