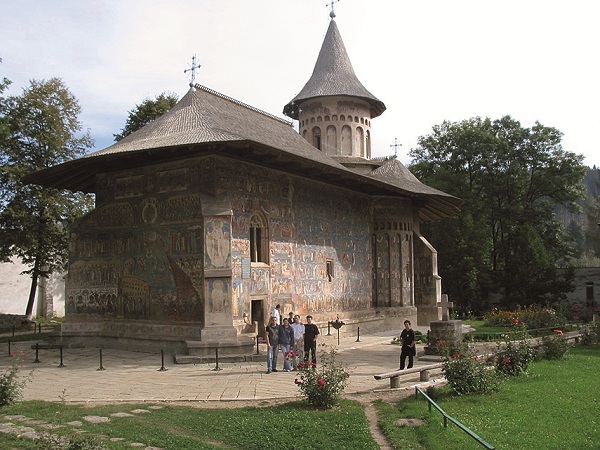 By the will of a Gracious God, through the prayers of Sf. Pious Daniil the Hermit and the zeal of the good and faithful Voievode Stephen the Great, the Voronet Monastery was raised up, between the 26th of May and the 14th of September in the year 1488, with St. George the Martyr as its patron saint, on the 23rd of April. From the very beginning of its history, the monastery was blessed with monks of extremely high spiritual calibre, and in the time of St. Pious Daniil the Hermit it was a true example of Romanian hermitage. In 1547, under the supervision of the Metropolitan bishop Grigore Rosca (whose tomb can now be found here), the porch was added and all the exterior paintings were carried out.

On the left of the entrance door lies the haloed image of St. Pious Daniil the Hermit. The beautiful “Deisis” Icon rests above the door; it depicts Redeemer our Saviour Jesus Christ, the most Perfect Judge, keeping watch over all those who set food across the threshold of our Church, with the Mother of Our Lord and St. John the Baptist to His right and left, mediating on our behalf for mercy. Occupying much of the southern wall like an Oriental carpet is a lovely Tree of Jesse. This represents Christ’s family tree, and he appears in the top centre, above his acendants.

Another major theme here is Akathistos Hymn, 24 scenes celebrating the life of the Virgin. One of the most lively scenes illustrates the occasion in 626 when an icon of the Virgin saved Constantinopole from an attack by the Avards and Persians. When Serge the Patriarch paraded the icon around the city walls, a storm of stones and fiery rain suddenly burst out of nowhere and destroy the enamy. St. George the Martyr, the patron Saint of our monastery, can also be found painted on the buttress to the left, and on the first row of this series of paintings, the prayer “Acatist” of St. Nicholas (above the window) and, lower down the prayer “Acatist” of St. John (Ioan) the New of Suceava. The paintings in the porch represent the Christian Orthodox Calendar (Menologion).

Many of the icons here bear graffiti-names and scratches – the scars that remain after the 206 years of the monastery’s disuse (the Habsburgs closed the monastery down in 1785, and it only became a religiuoscommunity again in 1991). Above the entrance, in the narthex, lies a superb icon – “Dulcea Imbratisare” (“the Sweet Embrace”) and directly above it, an inscription in stone names the monastery’s founded and the date it was raised. The tomb of St. Pious Daniil the Hermit, who became the first Abbot of Voronet monastery can also be found in the narthex, watched over by a burning flame. The monastery’s votive painting is found in the nave, were His Majesty Stephen the Great and the Holy along with Lady Maria-Voichita and Bogdan, his heir, are depicted in the act of giving, through the mediation of St. George the Martyr, the Monastery ot our Redeemer Jesus Crist, as a token of gratitude for divine aid given in the battle against the Turkish invaders.

The closed wall of the exonarthex provides an ideal surface for the grand finale of the Last Judgement. At the very top, in a circular frame shaded by the eaves and heralded by seraphim and angels, Christ sits in judgment immediately above the Allmighty, who is framed in another circle.

A piece of artistic value to be found within the church is the gilded iconostasis, fashioned from Yew-wood, its imperial doors being a true masterpiece of sculpture in wood. Various stages important for the study of the wood sculpture evolution can be found in the decoration of the iconostasis. The two icons and the imperial doors were made in Stephen the Great’s period, other icons are from the 16th century and the wakes from the 18th century. Also of a great value is the throne of the Metropolitan Bishop Grigore Rosca. We hope that the original throne, currently (1996) at Sucevita undergoing restoration, will soon be returned home to Voronet.

The paintings on a light-blue background are monumental, have clarity and compositional rigor. As blue as the sky of Voronet is, the painters tried to reproduce it on the walls of the holy church and succeeded to demonstrate that painted silhouettes could be clearly perceived even when watched from a distance. There is a striking note of authenticity in the painting from Voronet. Aspects of the usual life of those times gather new connotations, being reflected in the painting of the church.