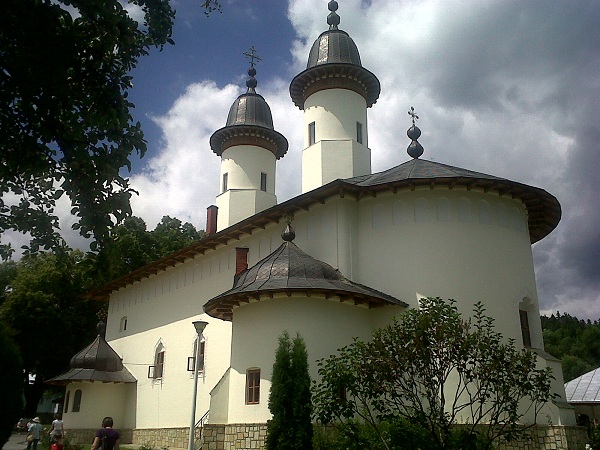 The first church at Varatec was a small church built in wood. As the number of nuns grew, the wooden church was replaced by the existing mansory church between 1808-1812, but painting and decoration continued until 1841. The second church, chronologically speaking, to be built as from 1808 was “the Assumption of the Virgin”. It was known and named by the community “the larger Church”. Its architecture preserves certain features taken up from the old church architecture and that of the 18th century in Moldavia. Like the big church Agapia has its neo-Classical elements, but these are synthesised with a traditional Moldavian style which includes a line of neo-Byzantine blind arcading under the eaves. Its windows have discreet Brancovenesque borders incorporating Islamic-style arches and are decorated with floral motifs. The painting was done in 1882 by painters T. Ioan and D. Iliescu and was cleaned in 1968-1969 by Arutium Avachian.

The other churches of Varatec Convent, built during the 19th century are as follows: “St. John the Baptist’s Nativity” – it was built in wood and then in brick, and “The Transfiguration”, built in brick and stone, in 1847. This last church has its inside walls painted by artist Eremia Profeta in 1965. There is also a chapel dedicated to St. Nicholas on the first floor of the belltower, placed in the middle of the guest’s house, which was built during the first decades of the 19th century. Particularly the church of “the Assumption” is a valuable artistic monument. Six hundred nuns live at Varatec Monastery. The complex houses an icon museum and a small embroidery school. The grave of poetess Veronica Micle, Mihai Eminescu’s great love, lies within the monastery walls. She committed suicide on August 1889, two months after Eminescu’s death. The monastery has a museum that hosts many valuable religious objects and books mostly made by the nuns. Apart from museum, Varatec has studios for carpet waving, embrodery and icon painting.

As Varatec Convent is placed in a beautiful glade in the sub-carpatic area, surrounded by meadows and shady forests, it has attracted many writer, poets and scholars. They found here the charming beauty of the environment, the hospitality of the monastic cells and a propitions atmosphere for rest, meditation and creative work. Among there, we recall: D. Bolitineanu, C. Negri, M. Eminescu, Gala Galaction, Calistrat Hogas, G. Ibraileanu and many others. Some of them have left outstanding pages describing the charm of the area where the covent is placed and the spiritual features of some of the nuns living here. In his poem “Calin” Eminescu described padurea de argint and codrii de arama (the silver forest and woods of bronze) that cloak the hills just above Varatec.