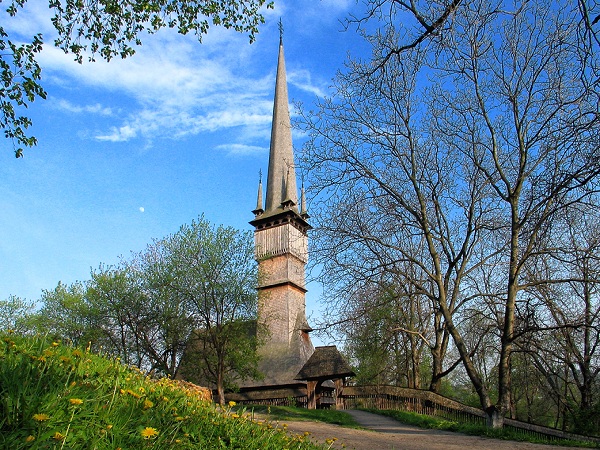 The initial plan included narthex, nave and altar. The Greek-Catholic community of the village that built it, used the church until 1948, when the communist system abolished this cult; between 1948 and 1990 there are mentions only about the Orthodox church, because after 1990 the building is once again the property of the Greek-Catholic cult. The altar is the work of the church-painter Stefan, the nave is the work of Stan, and the pronave is, as it seems, the work of Stan’s apprentice.

The painting was made by the painter Stefan of Sisesti, in 1781. The Church is one of the highest and the most important building of wood in the world. It is famous because of the way one solved the problem with the resistance of the tower against the wind.

Surdesti is a place very well known because of its very important wooden church from oak furniture with a tower of 54 m height, impressive for its elegance and harmony. Its spire, allegedly the highest wooden tower in Europe until Birsana capped the record, rises 54 m from its base. Its roof has one of the finest profiles of any Moroseni church, being pitched almost vertically to get rid of snow more easily. Its design marks a high point in Romania `s vernacular architecture, and from a distance the shingles resemble a soft cloak. At the west end is an elegant, arcaded porch echoed in a gallery above the lower roof, and inside the walls are decorated throughout with some of the most interesting frescoes in the Maramures.

Surdesti`s fresco cycle.
According to conservatour Fran Weather- head who studied the paintings in 1992, the frescoes are by an unknown hand. They were probably carried out in the late 18C or early 19C. The best scenes are on the high barrel-vaulted ceiling of the naos and are exceptional even for Maramures. Here you can see a centrepiece containing a painting of the Trinity with roundels containing the Lamb of God and the Virgin Mary above and below it. In the four corners are the Evangelists, but the most remarkable are four scenes showing the Apocalypse, St. John sleeping, the Prophet Elijah ascending to heaven, and Jacob`s Ladder. Angels and stars fill the gaps between the more important figures; one of the angels carries a human soul. The clouds surounding the scenes are a Barouque rather than a Byzantine feature.

Frescoes on the upper side walls depict the Stations of the Cross, while trompe l`oeil columns and pediments articulate the west wall and the apse. On the lower side walls there are saints, marthyrs and scenes from the Old and New Testaments, and the west wall also contains four roundels showing Adam and Eve and their expulsion from Paradise.

On the pronaos ceiling is a design which represents a pre-Copernican universe, with the planets and the Sun orbiting the Earth. Surrounding this are two circular borders which may signify the limits of God`s cosmos; the inner one with its green scales could be the serpent Ouroboros, while the outer band may represent flames. On either side of these rings are a Sun and a Moon, each one with a human face, and another spangling of stars fills much of the remaining space. You can find the Sun and the Moon motifs in other Moroseni churches and on wayside crosses, but the cosmos in the centre is probably unique.

The pronaos walls contain pictures of the Wise and Foolish Virgins, the Last Jugement, the Weighing of Souls (with soldiers wearing contemporary dress and foreign costumes, perhaps indicating that they are Turks or Tatars), as well as scenes showing Doubting Thomas, and Jesus and Women of Samaria.

An analysis of the paints shows that they were from cheap local sources: the blues are from indigo, the reds come from minimum, the greens are probably malachite and the yellow may be iron oxide. Luckily the murals on the naos ceiling have not deteriorated so badly as other areas of the church, but the cosmos in the pronaos is in much greater danger from candle smoke and rain. Surdesti is one of seven Moroseni churches whose fabric and murals are to be restored with the help of money from the Getty Foundation.