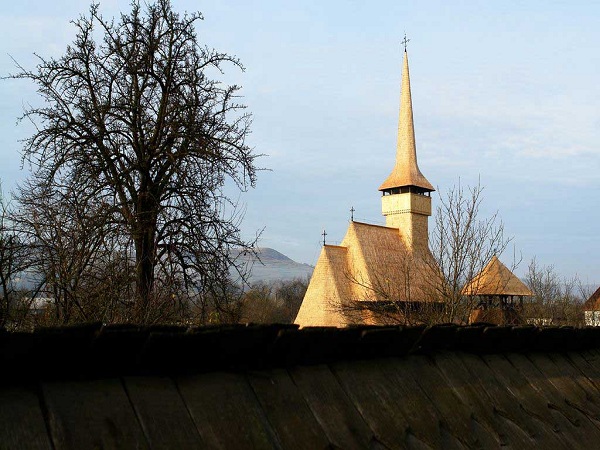 When you enter the house you cannot fail to see the beautifully embroidered towels hanging on the walls. The main characteristic of these towels is their unusual decorative spots of red, black or blue on a white background. The first written document mentioning the village is from 1353 when the village was the property of Bogdan of Cuhea. The church delights with its slim lines, surprising harmony of proportions and tower raising towards the infinity of the sky. One of the most beautiful can be found in Rozavlea Village.

The wooden church in this village is listed as a historical monument. It was built in 1720 and was named after the Archangels Mihail and Gavril (Michael and Gabriel). The interior of this church was painted by Ioan Plohod, between 1823 and 1825. The church also holds many beautiful icons painted on wood and glass. These are of great artistic importance, painted in the traditional style of Maramures.

The church in Rozavlea was constructed between 1717 and 1720 in another village, moved to Rozavlea and placed on the site of an ancient church destroyed during the last Tartar invasion of the region. The interior wall paintings are painted by Ion Plohod. The interior is divided into the traditional rooms of a Romanian Orthodox church: ante nave, nave and altar. The altar is always at the east end of the church, the direction in which Orthodox believe Christ will rise again. A porch may also be a part of the church.

The tower is always balanced in size and position with the body of the church. The 18th century Rozavlea wooden church well preserved interior paintings. The wooden church in Rozavlea was also built to evoke the battles against the Tartars 1717.It is erected of fir tree logs placed on oak tree logs and a stone socle with wooden icons of exterior painting